Up is a card game for 2-10 players. The basic deck is for 4 players. If more people want to play just use a second (or third) deck. Originally  Up was played only by adult players. However it proved that it can be played by children and in mixed groups as well. Therefore, it isn't important whether you are 7 years old or 99 years. You will have a lot of fun playing Up.

Idea of the game:

The cards represent the building materials for a tower.  The number on each card stands for the diameter (and therefore weight) of the respective segment. The card valued „11“ indicates a segment for the broad, heavy basis of the tower while the card valued „1“ indicates the narrow, light top of the tower. Purpose of this game is to get rid of ones cards as fast as possible. To get rid of them the players have to add their cards to a jointly built tower. When the tower is built a basic rule applies: only segments that have the same or less diameter/weight can be built upon the previous segment without problems. There are two special cards for each color in the game as well.

Aa complete set of cards (valued from 1 to 11 and two special cards) is needed for each player. To make the separation of the cards easy the sets have different colors. Besides helping to separate the cards the colors don’t have any function. Surplus cards are put on the side.

Distribution of the cards:

The oldest player starts as distributor. S/he is riffling the cards. When done s/he hands the stack to the player to the right who lifts a card from any place in the card deck. If the uncovered card is a “-2” or an “arrow”-card the player may keep this card (s/he is not obliged to do so but will most likely do). Otherwise the card is put back into the card deck and the distributor distributes the cards, starting with the player to her/his left. Distribution is done clockwise. Each player gets only one card at a time. That is: the first player gets her/his first card, then the second player gets her/his first card, and so on. The first four cards are put face-down in front of each player. The player is not allowed to see the value of the card.

The next four cards are (again one after the other) put on top of the face-down lying cards. This time the faces of the cards are showing up though.

Finally each player gets five cards in her/his hand (only the player who kept an uncovered “-2”- or “arrow”-card at the beginning gets only four cards). 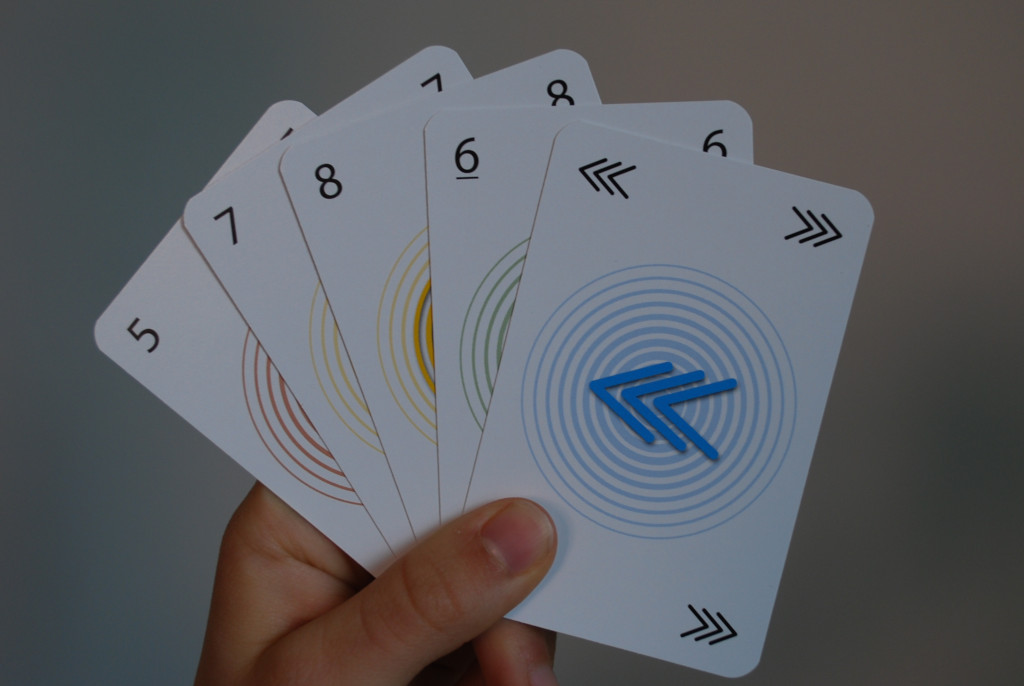 Get rid of your cards before anybody else does!

Course of the game:

The player left to the distributor starts. S/he puts a card of her/his hand cards in the middle of the table. Normally s/he will play the card with the highest value, but s/he may also play a card with a lower value. The next player (clockwise) builds the next level of the tower by playing a card that has either the same value or a lesser value. In this first round s/he is required to take the card from the hand cards as well. Now the next player builds the third level of the tower. And so on. And so on.

After the first round each player can decide whether s/he plays a card from the hand or from the cards that are face-up on the table. If a player has multiple cards with the same value s/he may play them together at once (however s/he does not need to do so!). It is not allowed though to combine cards with the same value from the table and from the hand,though. Jointly played cards have to be from one source. Only when a player has played all of the face-up cards on the table s/he may also play the face-down-cards. These cards have to be played “blind”. That means the player does not know which value the card has. The lower the value of the current card on the top of the tower is the higher the risk to uncover a card that has a higher value. Therefore it is a good idea to have cards with low values left on the hand until the very end of the game.

What if a player can’t put neither a card with the same value nor a card with a lesser value on the „tower“? There are three ways to get out of the mess:

If none of these options is available the player has to put a card with a higher value on top of the tower. Since the „current diameter“ ot the virtual tower can’t support the weight of the „larger diameter“ the tower „tumbles down“ and the player has to take all cards of the tumbled down tower in her/his hand. S/he then starts the next tower by putting the new foundation on the table (a single card or several cards with the same value). The foundation may be started either from the cards in the hand, from the face-up cards on the table or (as long as ALL four face-up-cards on the table are already played) from the hidden cards on the table.

One important thing: While normally players will try not to destroy the tower they can do this by purpose. No player is required to play a card that will keep the tower stable. Sometimes it is even advisable to play a higher card that will bring the tower down, e.g. to get into possession of certain cards.

There are two special cards for each color.

The „-2-card“ reduces the current diameter of the tower by the value of two. E.g. if this card is put on a card valued „7“ the next player needs to put a card with the value of „5“ (or better) on the tower. If multiple “-2-cards” are played at the same time their value is totaled. E.g. if three „-2-cards“ are put on the card valued „7“ the next player has to play a card with the value of „1” to keep the tower intact. Please note: “-2-cards” are not allowed to generate a value of less than „1“. If they do so the tower tumbles down and the player of the “-2-card(s)” has to take all cards in her/his hand. If a player plays a face-down card in order to start a new tower and this card is a “-2-card” s/he has to take this card into the hand and play another card. If this is not possible, since this card was the very last card, the game is finished anyway. The same is true when the player turns the last hidden card (as his/her very last card) and it is a “-2-card” - even if it normally would not be allowed to be played in this specific situation.

The card with the big arrows is called disposal card. This card can played in any situation. When played the card removes the current tower from the play. All  cards (including the used disposal card) are put on the side and will not be counted at the end. The player who played the disposal card will start the next tower. The disposal card may also be played as the first card. In this case it will only remove itself from the game and the player is allowed to start another new tower.

When a player plays her/his last-but-one-card s/he is obliged to announce this by saying “last card”. If s/he forgets this (accidently or by purpose) s/he will be skipped at the next round. Can a player end the game by putting multiple cards with the same value on the tower s/he does not need to say “last card”.

As soon as a player has played all of her/his cards the game is finished. The other players now count the total values of their remaining cards (in their hands and all cards on the table).

The points are written down as negative points. The minus-sign is omitted since it is easier to write. The points are added up after each game. Thus the last line always shows the ranking of the players. 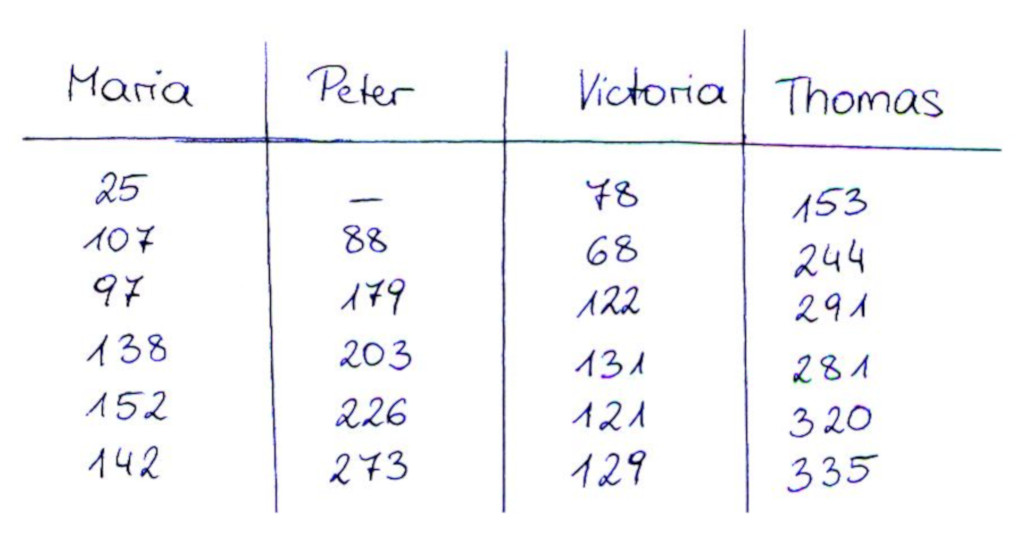 Children who are too young to count higher numbers may just count the number of remaining cards and write them down (= negative points). The child with the lowest point count has won at the end. Alternatively each child that ended a round may receive a token (e.g. a match, a coin, a toothpick, etc.) for this win. The child with the most tokens has won the total game at the end.

Starting the next game:  The person left to the last distributor acts as new distributor.

Up can be played in different variants. Here are three important ones:

In this version of Up  the game ends automatically as soon as one player has got more than 300 negative points. The player who has collected the fewest negative points up to this moment is the winner of this match.

Play with the "dirty One"

This variant of Up is played without the -2-cards. Each player gets only 4 cards on their hand instead of 5 cards.